by email
Join 7,737 other followers 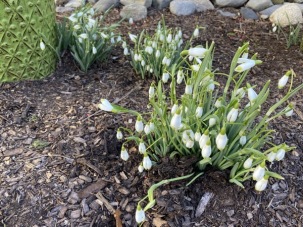 As we observe the Last Sunday in this year’s Season of Epiphany, we are doing so as the Pandemic transitions to an Endemic, at least in most of the United States, and as Eastern Europe erupts into war. As is so often the case, each time we hear a familiar story from Scripture, the context in which we placed when encountering it serves to unlock new insights into the text and points to deeper meanings we didn’t recognize previously.

Jesus is standing on the mountain top, often thought to be the same place in which the rebellious angels stood as they came down from Heaven. The account follows soon after Jesus’ words about how he was going to contend with the evil powers of the world and that the gates of Hell could not impede what he intended. On the mountaintop, as Jesus, revealed in glory, speaks with Moses and Elijah, they speak of what he was soon to accomplish in Jerusalem; the defeat of Death itself and restoration of the original purpose of Creation.

Jesus came so that we could have life; even in the midst of war and plague. I’ve always known and believed that, but now, as we are faced with tension and fear all around, his words and his actions give me hope that I didn’t understand how much I needed. Perhaps that’s the same for you as well.