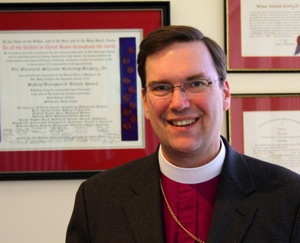 I am the Bishop of the Diocese of Rhode Island, which is part of the Episcopal Church. Previously I was the Dean of Trinity Episcopal Cathedral in Phoenix AZ. I moved to Phoenix from Bethlehem PA where I was the Rector of Trinity Church in the city of Bethlehem. (And, just to complete the list, prior to my time in Bethlehem, I was the Rector of St. Barnabas Church in Brackenridge PA and before that Curate at St. Barnabas Church in Hockesin Delaware. I was originally ordained deacon and priest in the Diocese of Delaware from Immanuel Church on the Green in New Castle.)

My training is as a clergy person is somewhat unusual. I did my undergraduate degree in Physics and Astronomy at Franklin and Marshall College. I did my graduate studies at the University of Delaware in Cosmology and Solid State Physics. I then left the world of Physics and studied at Yale and Berkeley Divinity Schools from which I received my theological degrees.

During these last years in Rhode Island I have been speaking and writing about a number of topics, first and foremost being the relationship and interactions between Science and Religion. I’ve published two books on the subject, “Lent is not Rocket Science” and “Entangled States“. I’ve published a third book “The Journey to Easter” which is a set of meditations on Luke/Acts. I’m working on a fourth book at the moment that is focusing on the changing business models of parish ministry.

In Phoenix, where I served as the Dean of Trinity Cathedral for six years, I was involved with local and national ecumenical work, continued my involvement with communications ministry and served on the state’s ecumenical Theology Committee. I’ve been interested in the issues surrounding immigration reform and was involved in the diocesan and faith communities’ response to proposed federal legislation this spring. As Dean of the Cathedral I worked closely with Bishop Smith to design alternative education programs for ordinands. I served on the diocesan Millennium Development Goals (MDG) Program group and worked with various parish based groups around the diocese to coordinate our mission response in this area. Toward the end of my time in Phoenix I was part of an ecumenical group of faith leaders here in the state of Arizona to seek ways to bring the voice of the faithful into the deliberations of the state legislature.

I served on the Dialogue team of Moravians and Episcopalians here in the United States. The agreement to enter full communion between the denominations was passed unanimously by both houses of General Convention in the summer of 2009 and by the Moravian Northern and Southern Provinces in 2010. The celebration of Full Communion between our two denominations happened in February of 2011.

I’m married to Karen McT Knisely and we have a daughter Kenney.