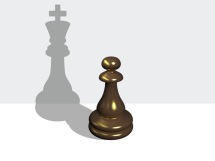 The Episcopal Church is the descendent of the Church of England. We still sometimes jokingly describe ourselves as the Anglican franchise in the United States. And with that history comes a complicated relationship with power.

The Church of England and its role as an established part of the British Empire was seen by us as something to be achieved in our context. At the height of the Empire’s power, we started building large Gothic cathedrals in the United States, seemingly to connect ourselves to their power and prestige. I suppose that’s an understandable human desire, but it’s not a godly one.

In today’s Gospel reading, we see Jesus standing before the sheer power of the Empire in his context. Pilate has no time for confusing riddles or to match wits with a rabbi. He needs to identify a threat to the power of the Empire and deal with it. And he does that – except by dealing with it, he sows the seeds of the Empire’s transformation and its end.

Jesus as King comes not to kill but to accomplish God’s reign by dying. It is something that the world’s powers, and often the Church, still struggle to recognize.