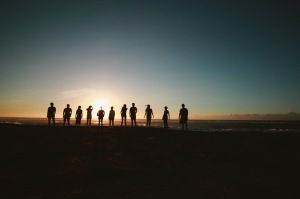 The 22nd Chapter of Matthew’s Gospel is filled with attempts to trap Jesus into saying something that would create a crisis for him. This week there’s an attempt to create division between him and the Imperial forces. There will be attempts in the coming weeks to create division between him and various branches of the religious community. There will be an attempt to make him either reveal his mission or to risk rejection by the crowds.

In all of these attempts, Jesus refuses to trapped by an arbitrary binary construct. Rather than being “forked” (a chess term) he expands the options and finds a third way.

Perhaps, as we approach a moment of possible political crisis, we too can look for a way to escape traps that are set for us, and find a way to remain a community even as we make a choice that will bring winners and losers.