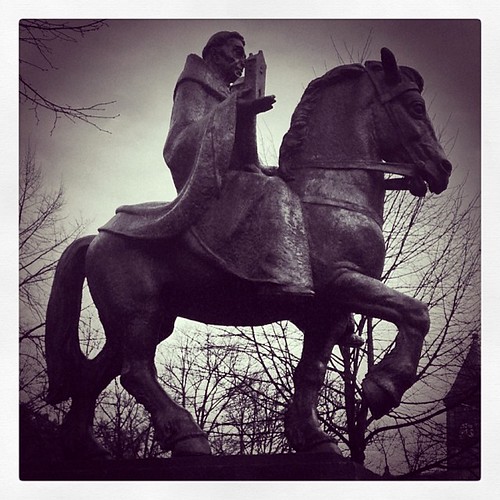 This evening we are celebrating the memory of Willibrord – the Apostle to the Frisians.

(I had to look up the location of Frisia – it’s essentially the lands that border the Eastern part of the English Channel and the southern portion of the North Sea.)

He was a celtic missionary of the same movement that brought us Columba, Alcuin, Bede and others. They were of Irish decent, though Willibrord was actually a North Umbrian, trained for ministry in the northern part of England and in Ireland and then sent south to the continent. These were the scholars who taught the court of Charlemagne to value reading and literature. They were the scholar monks who essentially re-Christianized all of Northern Europe after the Roman Legions withdrew from the Western part of the Empire and moved to the East.

Willibrord in particular was a man noted for his humility, his love of routine and common-place, and his desire to succeed in being the best sort of religious person he might be. Leading a delegation to Rome on behalf of the young religious community being planted in what is today the Netherlands, he was selected (and reluctantly agreed apparently) to serve as the Archbishop of the Frisians. (This is about a century or so after Augustine of Canterbury has arrived in Canterbury to convert the already Christian English people to Christianity.) Upon his return from Rome he chose Utrecht to serve as the center of his missionary efforts, and became the first Archbishop of Utrecht as a result. You might recognize the significance of that City for us as Anglicans. In the latter part of the 19th Century the Roman Catholic bishops of that region could not recognize the claims made about the office of the Pope in the First Vatican Council and broke away from Rome and became the “Old Catholic” Church, a denomination with which Anglicans have been in full communion for almost a century. (The society which promotes relationships between the Old Catholic and the Anglican Communion is called the Willibrord Society.)

All of that is interesting and important. But for life of me, I can’t easily see the connections between the lessons appointed by the lectionary and the saint whose life we’re commemorating. The most fulsome accounts of the life of blessed Willebrord talk about how he spent 50 years serving in his ministry, essentially loved and respected by all and died quietly in his bed. Why we are hearing of the lament of Jesus over Jerusalem somewhat escapes me. Unless it is because the lesson is meant to recall to us our long standing ecumenical relationship with our sister denomination and is a lament that we have not moved further toward a more visible ecclesiastical unity with other denominations in subsequent years. (I’m afraid that the Old Testament lesson from Ecclesiastes isn’t much help either, it is a recounting of the restoration of the Temple and regular worship of God in that place. Perhaps it is a reference to the re-Christianization of Europe after the Legions departed and the so-called Dark Ages began.)

But all need be lost due to my lack of understanding the original intent of the lectionary compliers. Looking more closely at the Gospel, which makes sense to me, as we are all called to preach the Gospel whenever possible, perhaps there’s a way to understand the chosen image not as reference to our failed ecumenical work, but in a different light, one which has meaning today, a light that is best seen by remembering the backdrop of what was happening in Northern Europe during Willibrord’s lifetime. I mentioned that his ministry took place during the period of time that led up to the rise of Charlemagne as the first Holy Roman Emperor. I didn’t mention that one of the reasons that Willibrord choose Utrecht as his base of operations was not just that it is situated along a major waterway, but also that it was possessed of a fine castle, a fortress, that allowed the person who controlled that city to control much of the economic life of the region. Willibrord went to the center of power and began a complicated relationship with earthly power as he spread the news of the Gospel to so many. And he made use of that close relationship with power, even allowing the Gospel to be used as an excuse to forcibly subdue neighboring tribes so that they could be saved.

In the Gospel Jesus describes Herod as a Fox and himself as a hen who wishes to gather her chicks under her wing. There’s an implied contrast between Herod the King, the Greek man who is claiming a suspect right to inherit the political power and armed might of Israel, albeit as a vassal king of the Emperor Caesar and Caesar’s legions. Jesus makes the distinction particularly sharp as he describes Herod as a crafty fox and himself as a mother hen. A crafty fox makes sense when describing a man who was essentially a courtier to a great foreign power. But why a hen as an image for the Messiah?

I’m afraid that our separation from the rural culture of the middle east has made understanding this particular metaphor harder than it ought to be for us.

Cal Bombay writing in “God’s Protection” makes at least one meaning of the odd image explicit, especially for those of us who grew up around farms here in the US:

…Across the prairies of the west it’s not uncommon for fires to sweep with great speed and intense heat. They are, obviously, a terrifying experience and often lives are lost. One of the areas of life that suffers most is the small animal kingdom. But the prairie chicken has an astonishing way of handling a prairie fire. At the first hint of trouble, the hen calls out to her chicks, who rush under her wings; she ruffles her feathers and squats down protectively on them. As the fire sweeps by, the mother hen simply dies in the heat, but more often than not, the chicks survive the quickly passing fire. It’s remarkable that a hen will be so devoted, even to death, for her chicks. (Cal Bombay, “God’s protection,” Crossroads Web Site, Crossroads.ca/calcom. Retrieved October 17, 2003.)

Barbara Brown Taylor was the one who helped me understand what Jesus is describing when he paints himself as a Hen to Herod’s Fox in the context of Jerusalem where Jesus will later be crucified.

Jesus won’t be king of the jungle in this or any other story. What he will be is a mother hen who stands between the chicks and those who mean to do them harm. She has no fangs, no claws, no rippling muscles. All she has is her willingness to shield her babies with her own body. If the fox wants them, he will have to kill her first.

Which he does, as it turns out. He slides up on her one night in the yard while all the babies are asleep. When her cry wakens them, they scatter. She dies the next day where both foxes and chickens can see her – wings spread, breast exposed – without a single chick beneath her feathers. It breaks her heart, but it does not change a thing. If you mean what you say, then this is how you stand.

Now, is there a connection we can make between this lesson and Blessed Willibrord?

It’s helpful to remember that our mother Church, the Church of England, is the established Church of England and Wales. That means it is more than partner to the ruling authority in those lands, it is an integral part of the government. That gives the Church in that part of the world a great deal of access and privilege; over which I’ll admit to have having the occasional twinge of jealously. But it also means that Church is frequently in danger of participating in the sort of morally questionable actions that expediency and political reality often require of those who govern.

For instance, while the Church of England eventually came to take an important role in the process of abolishing slavery in the British Empire (following the lead of the Quakers, a sect that the Church of England pushed to have banned and actively persecuted), for a significant portion of the 18th century the Church managed to not only keep silent about the slave economy, it managed to turn a significant profit at the expense of the human souls that were being torn from home and condemned to live the remainder of their lives in brutal conditions. And of course, the Church of England in New England, particularly in Rhode Island has had its own complicated and on occasion disappointing history with the slavery industry here as well.

The Church, our Church, was at the table when such decisions were being made, when this country was being built partly on the backs of the enslaved brought here in chains on boats built and owned in Rhode Island. And we did not act with honor in that day.

I wonder how things might have been different for the Church and for our Country if we had committed ourselves to using our privilege, our place at the table, to stand up and be the voice for those who were denied their place at the table? I wonder what would have happened if we had been more like the Mother Hen that Jesus is for us, and less like the Fox that Herod chose to be?

Of course there’s no way to answer that question, and I suppose to be fair, we shouldn’t spend too much time trying to project our own 21st century outrage at the institution of slavery and the Church’s participation in it onto the people of that day who made their decisions according to the light given to them in that moment. But still I can wonder. Still I think we should wonder.

Who knows what led Willibrord and his contemporaries to entwine their ministries so closely with the earthly powers of those days. Perhaps it was what was normal to them. Perhaps it grew out of desire to return to the days when the Church’s establishment in the Roman Empire meant that they could compel people to believe they way the Church authorities thought they should. Perhaps it was the least bad choice the Church had in that moment. But there’s little of the Hen in all of it, and a bit too much of the fox.

More to the point will be the decisions we make in our own day for the Church we serve and together lead. What will guide our decisions and our choices in our day? The craftiness of the fox? Or the dream(?) of the Hen?

It is my prayer that we will hear the wings beats of the Holy Spirit as we arrive at the moments in which we are confronted with such choices.