I’m posting this Lenten reflection here as well as on the diocesan blog, where the rest of them have been posted. The subject matter touches on faith and science and I thought those of you reading here but not there might be interested. 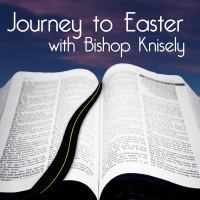 A few years ago I was invited to take part in a radio show that intended to discuss science and faith. I didn’t know much about the radio station, the host or the show. But the interview was scheduled for 1 AM, and I figured it would be an interesting experience so I agreed to participate.

It turned out to be a radio station that held to pretty literal and inerrant understanding of the Bible. That view isn’t common in the Episcopal Church, so when I arrived and discovered that particular stance was going to frame our conversation, I was a little concerned about how I might participate. It turned out too that I wasn’t the only clergy person there. There were two others. One was a young man who was a friend of the host. The young man had studied geology before he went on to Bible college. The other was, to my surprise and delight, a rabbi who was also a professor in the History of Science department at ASU. His particular speciality was the philosophy of science. (Any day I get to talk with a rabbi is a good day in my mind.)

The discussion went about as you’d expect. We all agreed during the first part of the conversation that there was no inherent conflict between science and faith. I did point out that such a stance didn’t mean that conflict didn’t arise – since it depended on what kind of science and what kind of faith we were talking about. The Rabbi agreed with me on that point.

But soon we three were challenged by a caller to the show who said that religious faith, particularly Christianity, must always trump scientific belief. “If science contradicted the Bible, then science was wrong because the Bible was clear and easy to understand and science wasn’t. That clarity was a sign that the Bible was given directly by God.” (According to the caller.)

There was a moment of silence from all of us. Then the rabbi said; “God does not make the Truth easy to find. God hides the Truth from us and expects us to use our Reason to uncover it. Why God does this I do not know. But this is what the Rabbis have always taught.”

I was nodding my head yes to the rabbi’s words. And I was doing so because I was remembering how Jesus would teach the crowd in parables like a traditional rabbi of his time, but that the meaning of the parables was often hidden. In today’s chapter we read how the disciples privately approached Jesus after he had told a parable to ask the true meaning of his words. And he told them, reminding us as readers that he didn’t tell the crowds the full meaning. Why didn’t he? I do not know. But he didn’t.

And this isn’t the only case of this sort of thing. In a number of places in the New Testament, Jesus explicitly says that he is hiding the full meaning of his words from the crowds. Sometimes he tells the meaning to the disciples. Sometimes he doesn’t. I don’t know why. I’ve certainly wondered though.

I was remembering all of this as I read through the whole of Chapter 8. Jesus heals some, drives out the demons in some, stills some storms, but doesn’t heal, exorcise or still others. Why? I don’t know.

The Bible, like the rabbi said, takes the Truth and doesn’t not present it in a simple way that it easy to understand. The Bible challenges us with contradictions, cryptic words and difficult to understand stories. Luke’s Gospel has all of this.

Why does the Bible do this? I do not know. But as we begin our second week of readings in Lent, I hope that if this is the first time you’ve read a book of the Bible straight through, you’re wondering the same thing. If it’s not your first time, I hope you’re still wondering why.