But to this point I’ve not seen any research on where the congregations of the Episcopal church are located in terms of community size. My guess has been that our congregations are in the city centers of historic communities – and rarely found in the middle of “metro-forms” (those loose suburban population centers that have no identifiable community core).

Someone along the line though must have done the research and the graphical results are posted on Facebook. 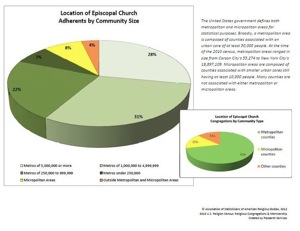 I don’t have much more to say about this than that at the moment. But it does help to explain why the topics that keep coming up in the Episcopal Church’s common life tend to be of the type that make sense in a place like downtown Phoenix and less like the ones that would make sense in a very small community like Benson AZ.

Any thoughts occur to you?